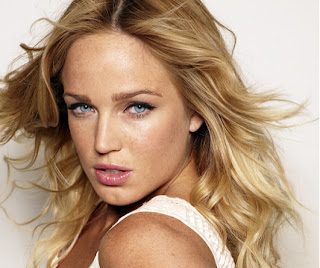 It's rare that a sexy, talented up-and-comer like CAITY LOTZ successfully conquers the big (or small) screen without first being terrorized in a horror movie, any horror movie! It's a rite of passage. But this young actress has escaped unfanged, until now! Lots has made her mark in the hit TV series MAD MEN and now takes to home theater screens in MTV's hotly anticipated horror series, DEATH VALLEY! In the new show a special unit of the LAPD: UTF (Undead Task Force) is followed by a reality/documentary camera crew while patrolling the mean streets of the San Fernando Valley which has become overrun by Zombies, Vampires and Werewolves! Here MAD MONSTER talks to Caity about the series specifically and her feelings about the genre in general...
MAD MONSTER: What attracted you to Death Valley?
CAITY LOTZ: Let’s see? I love that it’s such an interesting mixture of elements. It’s a comedy, it’s horror, it’s action driven, it’s gory. It’s a little bit of everything with a little bit of good old drama thrown in too...
[A big spontaneous uproar on the set interrupts the interview. Applause as Caity is given an unusual necklace]
CL: (Caity is apologetic to the entire room) Wah. Sorry!
MM: What’s this prestigious award you’ve just been given?
CL: This is the “necklace of shame” because my cell phone went off in my last shot. This is the embarrassing necklace you have to wear when that happens. I made it through to the last shot of the last day without ever having my phone interrupt. And here we are. Now I have to wear this for the rest of the day.
MM: Ah! So you were saying you like Death Valley because it’s a little bit of everything. Had you done any horror work before?
CL:  No I hadn’t.  I get scared so easily. I don’t like being scared. Some people scream and think it’s funny, but I’m terrified. I really get freaked out. Even when we’re shooting. I don’t go into Halloween haunted houses.
MM: Did you watch any scary movies when you were younger?
CL: I watched Leprechaun and it haunted me. From then on if I was downstairs and my dad was upstairs he’d call down (in a creepy voice) “Le-pre-chaun” and I’d cry. I have an active imagination so scary movies stick with me for a while. Stephen King’s “IT” also scared me. Scream scared me a lot too. Oh, and I stay away from the ones that are too gory like Saw.
MM: If you had an opportunity to be in a remake of those two films that affected you, IT or Leprechaun, would you do it?
CL: I dunno. Maybe?
MM: You know, now that you’re doing a show like Death Valley, you’re gonna acquire lots of horror fans. Do you plan on doing genre events and public appearances?
CL: Yes, I’d love to. For sure. I think we’re actually doing a horror convention coming up in LA soon. We’ll be there running around with our guns and chasing zombies.
MM: Any favorite monster on Death Valley? Vampires? Zombies?
CL:  Good question. Zombies are kinda boring. They’re cool to look at but there’s no personality there. I like the werewolves before they’re fully turned.  At least on our show. Because you can see the changes and hair start to grow, but they’re still human and nice. They haven’t gone into that rage mode. So werewolves are my favorite.
MM: Based on your experience on set, if you yourself had to become one of the show’s monsters what would it be?
CL: Vampire, no! Wait! With werewolves you change back into human form and can still live a semi-normal life sometimes. But there’s something sexy about being a vampire. I guess the “living forever” thing might get old. But I’m gonna go with Vampire.


We look forward to watching Caity Lotz battle the minion of the damned for a season of horror excitement in Death Valley on MTV. And fret not, Caity. It's never too late to overcome your fear of gore, monsters and the darkness and acquire a taste for blood!
Posted by Mad Monster at 5:54 PM 2 comments: 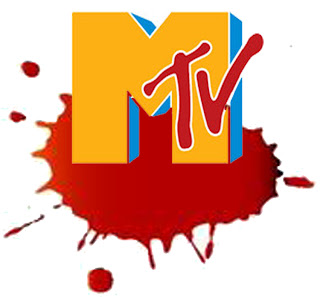 MTV pimps the Monster Bandwagon with their new genre series DEATH VALLEY. You heard right! The youth-culture network takes a crack at the horror trend that is creeping the nation. And MAD MONSTER magazine is there to bring you star interviews and breaking news items right from the set of this hotly anticipated show. MTV offers this teaser:

DEATH VALLEY is a scripted horror-comedy that captures he exploits of the men and women of the Undead Task Force (UTF) - an elite branch of the LAPD that was formed in 2009 when the San Fernando Valley became overrun by zombies, vampires and werewolves. While scientists frantically search for an answer to what caused the outbreak, the UTF is responsible for eradicating the monsters, or at least containing them to the Valley. Documenting each case and paranormal encounter is a daring camera crew that is embedded with the UTF from the beginning to end of every shift.  As a result, the documentary crew becomes central to the storytelling and is as much a part of the action as the young cops and the undead they encounter. Always alternating between humor and horror, Death Valley at times borrows from the conventions of reality television creating a visual style that is a blend of follow documentary and sci-fi action. The series stars an ensemble cast including Caity Lotz (who plays “Stephanie” on MAD MEN) Tania Raymonde (who played “Alex Rousseau” on LOST) and Charlie Sanders (Funny or Die’s The Big Dog). “Death Valley” is executive produced by Austin Reading and Julie Kellman Reading for Liquid Theory. Eric Weinberg and Tim Healy will also serve as executive producers, along with MTV’s Tony DiBari.
Sounds promising, right? And if MTV's track record for producing edgy, youth-oriented programming is any indication of the quality of DEATH VALLEY, we're in for a thrilling-killing joyride!

Others Just As Mad!

Mad Monster
Hollywood
Mad Monster is a monthly genre print magazine made by and for the modern monster fan. In the pages of Mad Monster you'll find Horror, Sci-Fi & Fantasy entertainment, information, puzzles, games and activities all presented with innovation and a graphic, retro-flair. Mad Monster magazine fills the gap between the classic horror mags and more modern periodicals. We put the FUN back in horror!