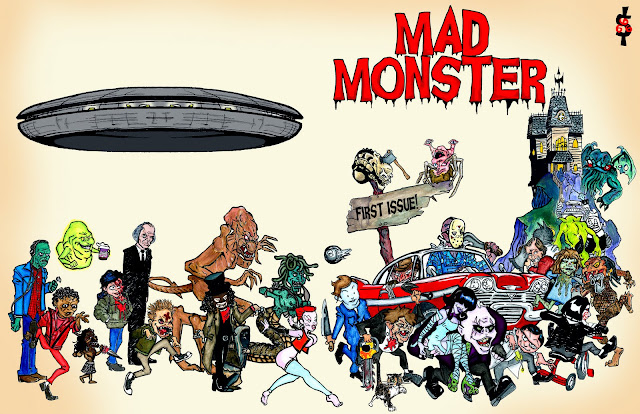 Frank Frazetta homage (wrap-around) cover of the 1st-EVER Mad Monster mag!
MAD MONSTER magazine is ready for your body to snatch! To order yours, click HERE! In the tradition of iconic horror mags of the past century, MAD MONSTER mag is creepy-creative entertainment and media commentary at its best. As early as 1896 when George Melies presented his film, "House Of The Devil", Horror, Sci-Fi and Fantasy movies have captured the imagination of the public. And by the 1950's "classic horror" magazines began to do more than just delight readers. These periodicals actually turned the spotlight from the stars in front of the camera to the artists and craftspeople behind the scenes - the people who MADE the monsters we love to loathe. Disciples of the monster-magazine-movement turned out to be stars like Steven Spielberg, George Lucas, Guillermo Del Toro, Tom Hanks, Billy Bob Thornton, Peter Jackson and many others! Now MAD MONSTER throws its BAT into the ring! Uncle Creepy (Steve Barton) of DreadCentral.com says, "you're gonna want two copies; one to keep and one to play with." 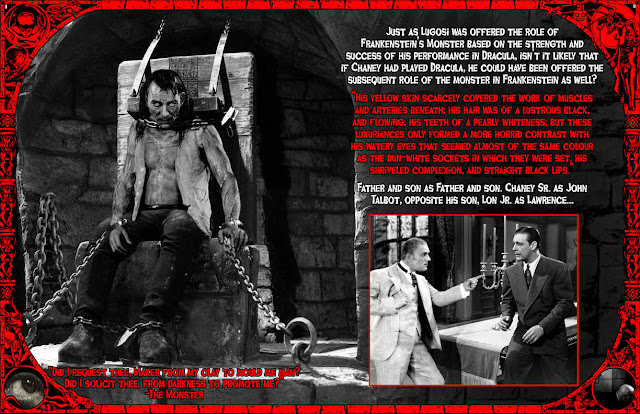 "What if" Lon Chaney had lived to play other classic horror character roles?
Today, you may find a number of genre magazines that deal specifically with classic horror and some others that chronicle only contemporary faire. MAD MONSTER fills the gap between these
bookends. New MAD MONSTER magazine is a purely modern magazine decked out in retro-style and always faithfully dropping a trail of dread-crumbs to lead the way from horrors of today, back to the origins of the most popular genres in pop-culture. MAD MONSTER is informative, irreverent, challenging, titillating and always graphically and thematically innovative. How? Well, here are a few ways:
But don't take our word for it. Listen to what Johnny had to say about MAD MONSTER on his "Freddy In Space" blog! 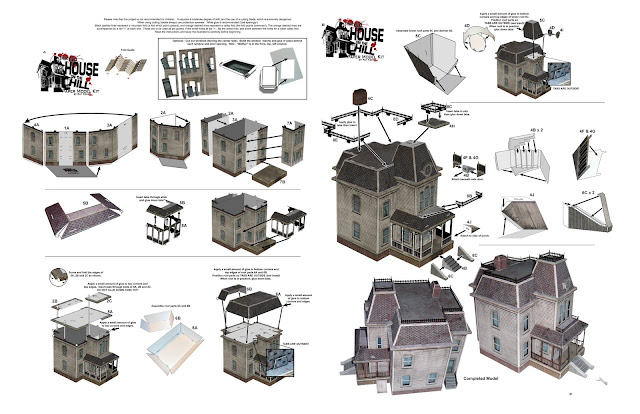 Assembly instruction sheet for the "Old House On The Hill" cut-out model.
MAD MONSTER is setting out to bring a new generation of horror seekers into the fold while paying respect to the classic horror fans that started it all! Horror, Fantasy and Sci-Fi are just other words for imagination and creativity. And we know from experience that a world filled with imagination is world full of endless possibilities! MAD MONSTER continues our horror legacy by honoring, celebrating and reinventing it! Order your copies of MAD MONSTER today! 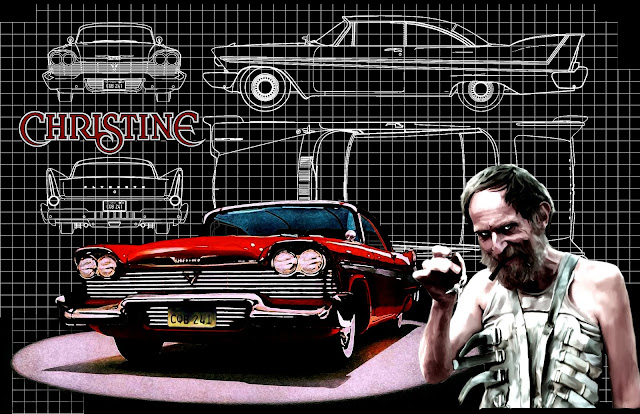 Our premiere centerfold of fender fatale Christine!
Posted by Mad Monster at 10:51 AM No comments:

Others Just As Mad!

Mad Monster
Hollywood
Mad Monster is a monthly genre print magazine made by and for the modern monster fan. In the pages of Mad Monster you'll find Horror, Sci-Fi & Fantasy entertainment, information, puzzles, games and activities all presented with innovation and a graphic, retro-flair. Mad Monster magazine fills the gap between the classic horror mags and more modern periodicals. We put the FUN back in horror!